Be Yourself and Explore the Better YOU. A story full of determination – of Smitha Sadasivan

Smitha was just 19 years old , when she was diagnosed with Multiple Sclerosis  (MS). There was no history of MS in the family , and the diagnosis took a long time. The delay led to severe mobility issues, bladder failure and repeated hospital visits. Lesions in her brain and spinal cord revealed from MRI scans helped identify her condition.

She was still in college at that time. She herself did not understand the neurological disorder properly, and she could not explain it to others, who had started thinking that she was becoming lazy. Due to the health condition she was getting tired and always beginning to feel sleepy. She had difficulty in concentrating in the studies at the College.

Over the years, she faced multiple health issues – apart from exhaustion and pain, she had reduced mobility, urinary incontinency, reduced sensation all over the body, gastro issues, serious visual issues and multiple lesions in the brain.  Multiple Sclerosis affects the central nervous system and affects different organs and their functions. Eventually, she had to discontinue her college due to severe and frequent relapses which resulted in repeated and long hospitalisations. Whereas her professors kept motivating her to study from home and write her examination with the help of scribe and made all possible arrangements. She learnt her lessons while lying on the bed and listening to her mom reading aloud the lessons for her. She also wrote her exam by lying down on the bench while the scribe sat next to her and wrote the answers that she dictated.

Smitha keeps a track of all developments taking place in the medical field connected with MS. She had tried almost all other fields of alternate medicines, and continues with her regular check ups and medications, which is also based on the information and effective guidance from Multiple Sclerosis Society of India, Chennai who as well supports persons living with MS in every possible way. She undergoes all advised therapies, and meditates too.

Smitha, who has a M.Phil Degree, embarked on the role of an activist when she was just 23 years old. At Vidya Sagar’s Disability Legislation Unit, she started learning and understanding the rights of people with disabilities in addition to taking physiotherapy sessions. A major change brought in, through her efforts, was  getting UGC to bring out Braille question papers for the first time in India (for a UGC NET candidate with deaf-blindness) by facilitating a PIL (Miranda Tomkinson Vs UGC) in the Madras High Court in 2013.

Her efforts in the disability domain have brought in many positive changes. She facilitated a parliamentary training programme for women with disabilities to understand the legislative structure. She also undertook a detailed study on the practice of right to legal capacity of persons with disabilities in 11 countries with the support of Thomson Reuters Foundation.  In 2015, she embarked on a new mission–to make the Indian electoral process accessible for persons with disabilities and others with reduced mobility.

Having a passion as well as dedication in the field of disability rights, has helped her in addressing the issues and also getting excellent results.  She believes in working closely with fellow persons with disabilities as well as the authorities, so that the real time conditions can be conveyed by the primary stake holders and the authorities can understand. She has invited authorities to different locations and areas where attentions are needed, and she has been very successful in establishing the facts and highlighted the areas which need attentions.

She was successful in involving the media, to raise her voice against injustice when she was just a bystander at the Madras High Court. She was accompanying an advocate and found that the toilets inside the Madras High Court were inaccessible for herself and other persons with disabilities. Sooner she came to know that another petitioner who also uses wheel chair had to urinate into a bottle to relieve himself due to lack of accessible toilets. This aggravated Smitha , who took this to the media to highlight the plight of essential facilities being inaccessible within the HC. Within a couple of days, the court had an accessible toilet.

In 2015, she in collaboration with Disability Rights Alliance took the then Chief Electoral Officer, Tamil Nadu, to the Institute of Mathematical Sciences, and arranged for him to learn first-hand the needs of people with disabilities. This further led to people with psychosocial and intellectual disabilities getting included (for the first time ever in the country) in the electoral roll for the 2016 Tamil Nadu state legislative elections. She also got the CEO’s office to conduct a special voter awareness camp at Vidya Sagar, where adults with intellectual disabilities got to understand the voting process.

Smitha set her eyes on making Marina Beach accessible for persons with disabilities and the elderly. Along with a team from Disability Rights Alliance (DRA), she worked closely with Greater Chennai Corporation to make this possible . She and DRA worked with GCC and ensured that  Marina Beach  was made  accessible every World Disability Day (3rd December) by setting a temporary accessible and safe pathway across the beach till the waters . In 2019, there was a week’s activity at the beach front. It was a colourful and well attended event. The pathway that was set up from the entrance till close to the shore was accessible to all wheelchair users. And the colourful beach wheelchairs which were imported could take a person to the waterfront too. Some of the children were setting their feet in the sea waters for the first time. Work is in progress to make this a permanent fixture.

Smitha, works with determination and passion to make every place accessible to persons with disabilities – be it sidewalks, or be it the transportations. She makes it a point to advise everyone to make the buildings or hotels accessible. She believes that no one should be left behind at any place. She would like to make the whole of India, fully accessible with respect to infrastructure, public places, environment, community areas, transport systems and information systems.

Today, 20 years after she was first diagnosed, Smitha has become a prominent personality. Despite setbacks in her health, her determination has made her a successful person. She has accepted her condition, but decided to live a lively life despite all the problems. She is a consultant, a speaker, and an advisor. She travels a lot within India and abroad attending meetings and discussions. Due to fatigue, there have been times, where she had requested for a bed to be arranged in the meeting halls.  She does not like to miss out on the discussions or networking.

She advises the other persons with MS, not to lose hope. She says there is a lot of research in this field and new medicines are being tested. She encourages them and tells them to stay determined, and continue concentrating on their education and careers.

Smitha dons many hats, and has multiple roles to play including being a resource person. She is now the Accessibility Consultant to the Election Commission of India, apart from being an active member of Disability Rights Alliance India. She is a member of the Multiple Sclerosis Society of India (MSSI). She is associated with different forums, initiatives and organisations including Vidya Sagar, National Committee for the Rights of Persons with Disabilities, Association for the Deaf, Organisation for Rare Diseases India, Rising Flame, South Asia Regional Program on Women’s Institute on Leadership and Disability.

Apart from many awards and recognitions, she was awarded the NCPEDP – Mphasis Javed Abidi Public Policy Award for Universal Design, in recognition for her efforts in promoting accessibility for people with disabilities.

She is very thankful to all her teachers, friends and well wishers who have been a part of her journey and supported her immensely. Her parents play an important role, and she says her mother has been very encouraging apart from taking care of  her physically especially during her relapses. MSSI (Multiple Sclerosis Society of India) has been a great support for her since 2002 in all aspects of her life and development, and she has high regards for Mrs. Ann Gonsalvez who has been a great emotional support to all members.

Vidya Sagar gets a special mention from Smitha, where she says , she got the platform to be herself and explore things which she could do and achieve.

She has high regards and respect for Sri Sri Ravi Shankar, whose guidance and love helped her to face all her difficulties with a smile. Smitha believes that there still remains a lot of things to done in this segment. Being a positive minded person , she smiles and says …….”It’s Possible “ 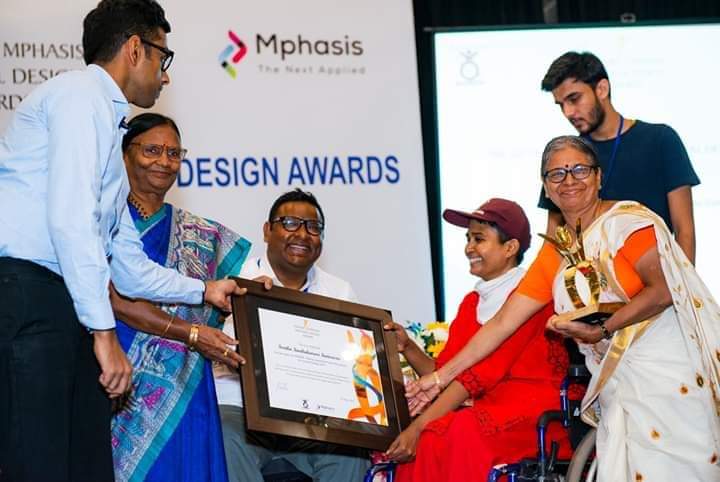 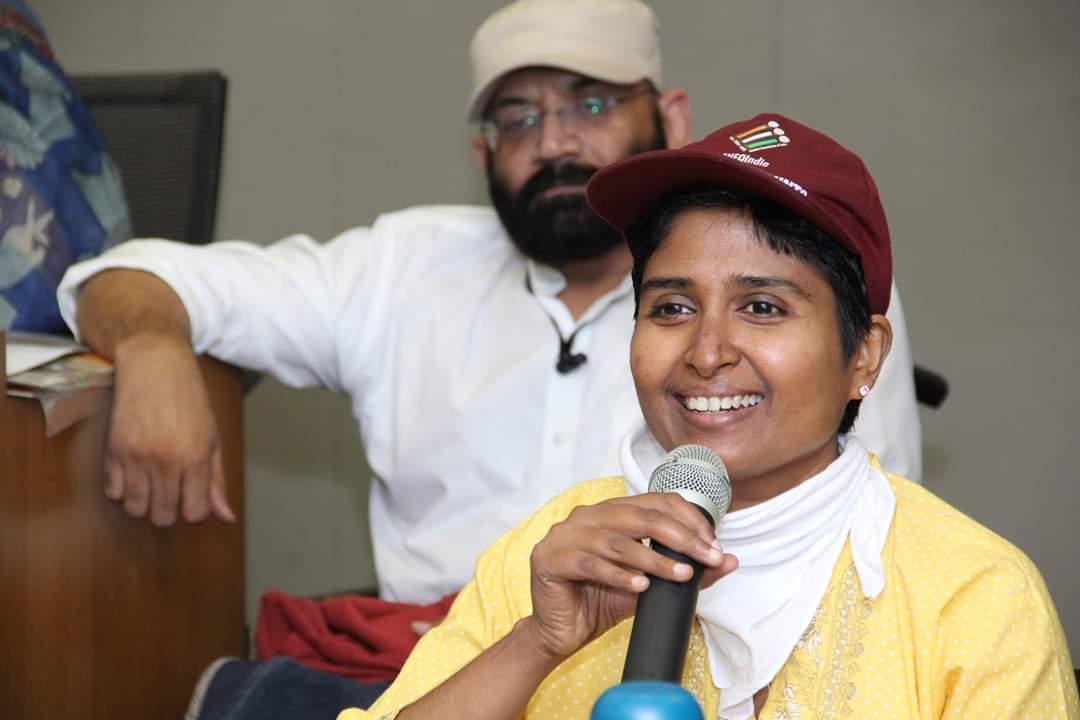 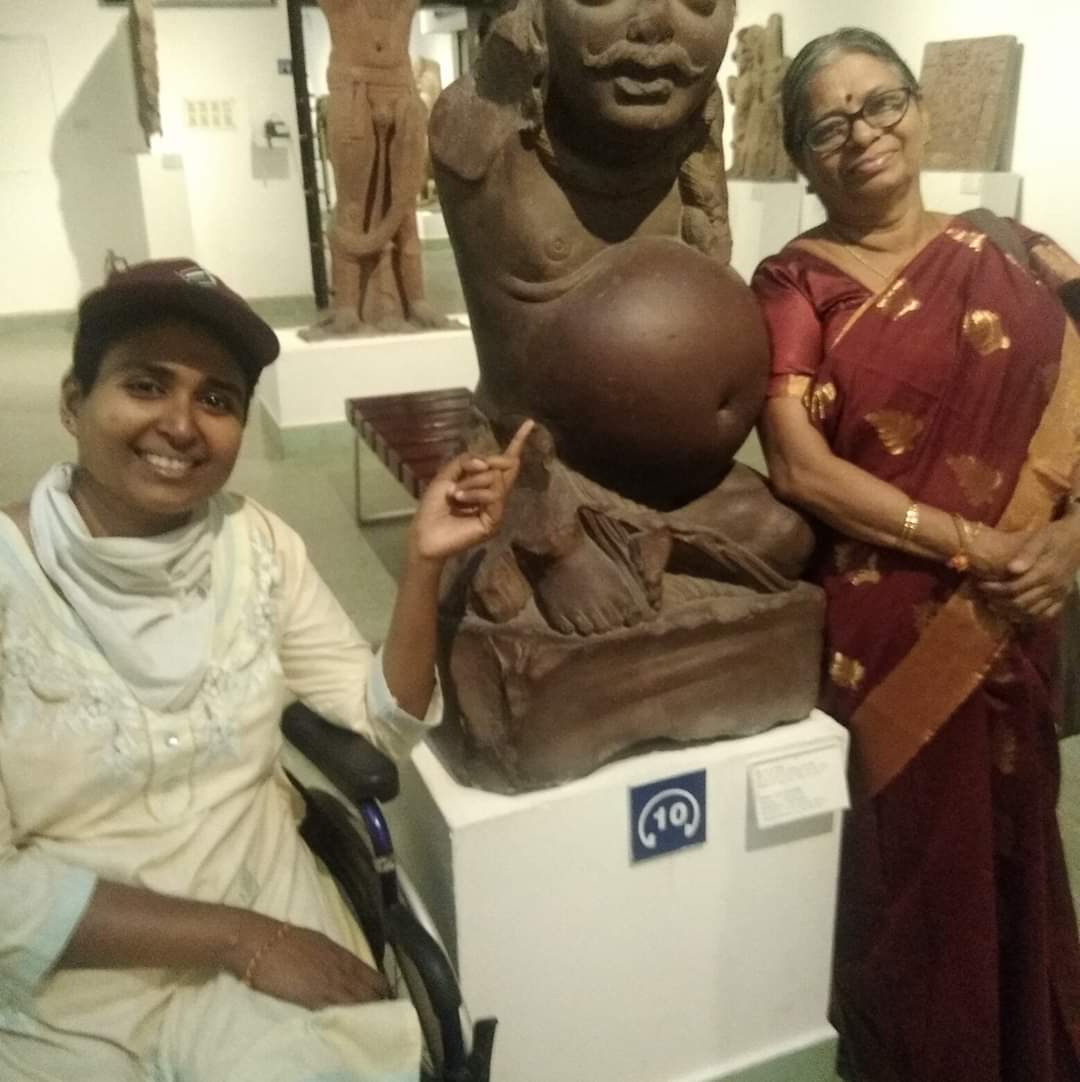 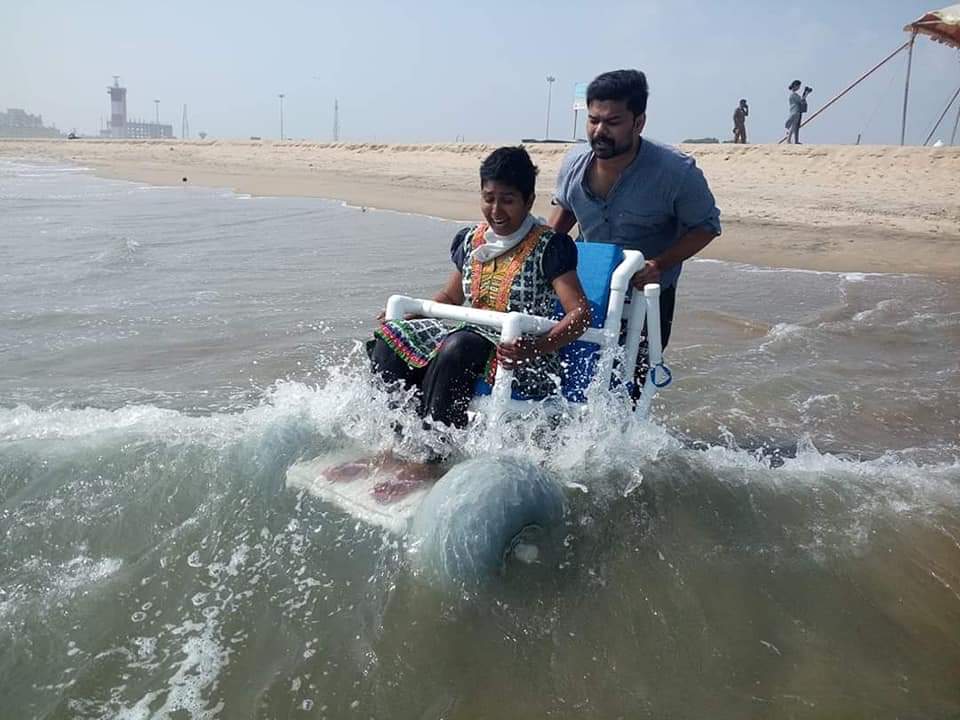 One thought on “Be Yourself and Explore the Better YOU. A story full of determination – of Smitha Sadasivan”