Born in Raipur,Chhatisgarh, she was brought up in Junagadh, Gujarat. When she was just eleven years old, she started facing and understanding her difficulties and challenges.

In 1985, Dr. B.S. Singhal of Bombay Hospital, Mumbai, diagnosed Nishtha’s case as a rare form of Charcot-Marie-Tooth disease – a rare genetic disorder. This is a Rare Neurological condition which is progressive degenerative disorder. Currently there still is no medicine as a cure.

There were many medicines prescribed, and nothing was working, and at that age Nishtha was unable to understand as to why she was not getting cured. She remembers taking homemade and traditional medicines too.  She unfortunately lost her Dad when she was just 15 years, and it was very difficult for her to come to terms with this sudden loss. She fell sick for a long time after this, and during this same time she was affected with Tuberculosis. She was bedridden for nearly 5 years. Having been confined to her bed and remaining in the four walls of her room – in fact made her more determined to face the challenges

She could have been confined to bed, or might have been given up. But, even at that young age she was determined to keep herself busy with her studies and activities. The treatment along with her other medicines made her so weak, that she was using a wheelchair for daily activity. She continued taking her medicines and exercise therapies, and soon was moving around with the help of a Walker.

She continued to focus on education. She completed her graduation from Junagadh and did a Post Graduate Diploma in Human Resource Management at Ahmedabad and MBA.  She has worked with a number of organizations like the Ellisbridge Gymkhana, SEWA, and Udgam School, and is currently working with the Indian Institute of Management, Ahmedabad as a Clerical Assistant.

Soon, she was moving around in her customized Scooty, and was feeling the thrill of financial independence too.

While she was going about her education and career moves , she never forgot her Dad’s advise – or Mantra as she calls it – “Always think of people whose suffering is far worse than yours and live the life given to you in the best possible manner.” .And her journey helped her understand the challenges faced by others in similar conditions. She was determined to help others and empower them too. After meeting Ms. Sanjana Goel (President IAMD) in 2004, Nishtha took active interest in the field of rehabilitation and the empowering of people afflicted by Muscular Dystrophy.

In 2008, she coordinated the 19th Medical Awareness Camp of the Indian Association of Muscular Dystrophy (IAMD) in Ahmedabad. Since then, she has conducted camps in nine districts in Gujarat, three picnics and donated 14 wheelchairs which empowered the people living with Muscular Dystrophy.

In the camps she was concentrating on the person’s independent mobility, empowerment and also on social interactions. She soon started conducting an annual picnic for families with persons with Muscular Dystrophy.

Nishtha wanted to address the different needs of youths with disabilities – mainly social, economic, psychological, and self reliance. She was lucky to get an excellent Mentor – Dr.Sumithra Prasad of DORAI Foundation of Chennai who was running such similar successful programs. Dr.Sumithra personally used to visit the UDAAN camp to mentor and give a lot of positive energy.

NIshtha has conducted 17 UDAAN Youth Empowerment Camps all over India till date. Professionals from different fields have been part of these camps where knowledge and experience is shared on all relevant topics – medical, education, health, empowerment, opportunities etc.

NIshtha is happy that there has been a good response to all the camps conducted. At every camp there were more than 50 persons attending. Apart from skill training, Yoga and Meditation exercises were taught. She is happy that she could promote some persons and some products using the network, and helped a couple of persons to set up self sustaining income opportunities.

While she gains immense satisfaction by working in this field of empowerment and social activities, NIshtha continues to attend to her personal interests.

She loves to travel.  She has completed a difficult journey  – Amarnath Yatra  – just because of her sheer will power.

Nishtha is happily married to an Architect Krishna Anand, and is blessed with a beautiful daughter Aakanksha. She joyfully narrates how the NID student fell in love with her at the first sight. She was shocked when he expressed his love just within a week after meeting her at a Social awareness Camp. At first she was thought it was a joke, but soon realized his love was real, when he insisted that he had seen her and not her disability.

NIshtha says her Mother and her Husband have been the main pillars of strength and support.

Nishtha has been working in this field with a keen interest and desire. She is very much interested in spreading awareness about Muscular Dystrophy, about Rare Diseases and Disorders, and about the need for Inclusivity in all areas. She is always looking for opportunities to make some positive changes in other persons with special needs.

Nishtha being a strong believer in God and Humanity, believes there are 4 things one should always wish from God

1- Struggles – she believes that only when one faces a few struggles, only then one will actually understand the values of health, humanity, freedom and independence.

2- Strength – she says one should always ask God to give strength to face every challenge, difficulty and struggle

3- Hope – when she was spending time on the bed within the room for so many years – the one thing which kept her mind active , and made her more determined – was her Hope.

4- Miracle – One should always believe that Miracles do happen, and God can help one out from the most difficult conditions.

Her efforts and achievements have been recognized , by many and at many occasions. The list of awards and recognitions are endless  – just mentioning a few below –

2. In 2011, she received the ‘Best Employee’ (person with disability) award from the Government of Gujarat.

3. In the same year, she was honoured with the ‘Long Achievement Award’ by the BJP MahilaMorcha for her contribution to the differently abled sector.

4. She received the ‘Special Achievement Award (twice 2008-2010)’ for social activity from the IIMA Welfare Committee.

5. She has also been invited as a speaker in the seminar organized by FICCI and CBM Australia on ‘Promoting Inclusive Development through CSR: Equal Opportunities to people with disabilities’.

9. She has won many leadership awards from different organizations

Apart from all this , she has taken part in a Mrs Wheelchair contest and won , she has been part of a Women’s Bike Rally in Ahmadabad , and continues to be a sought after motivational speaker . 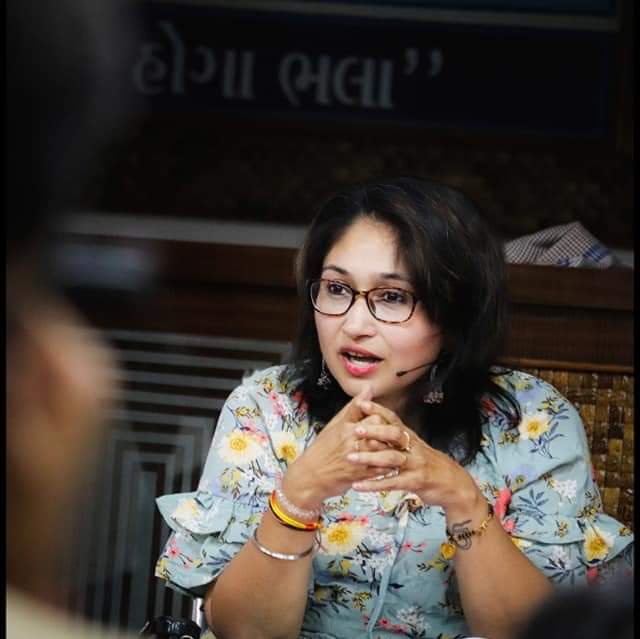 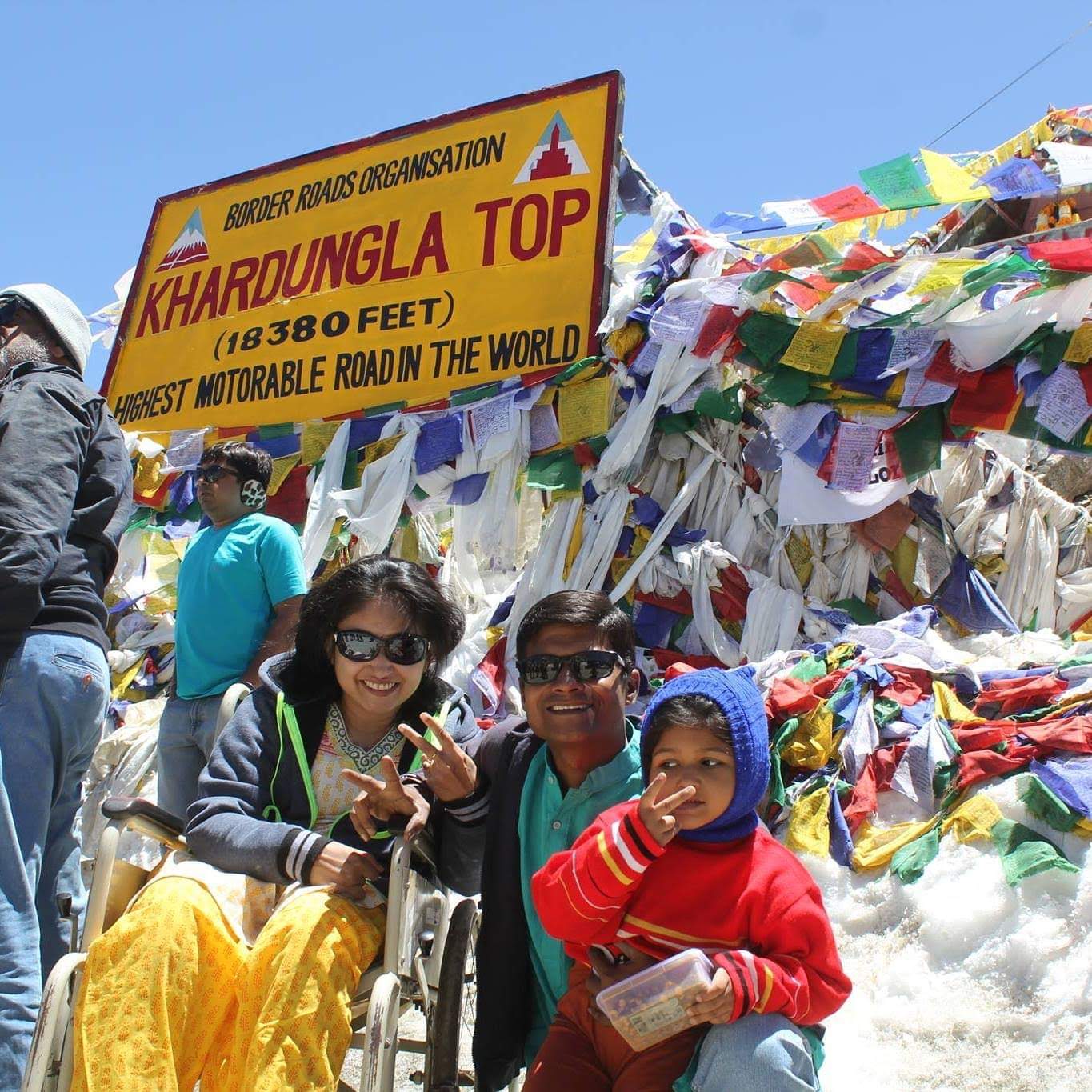 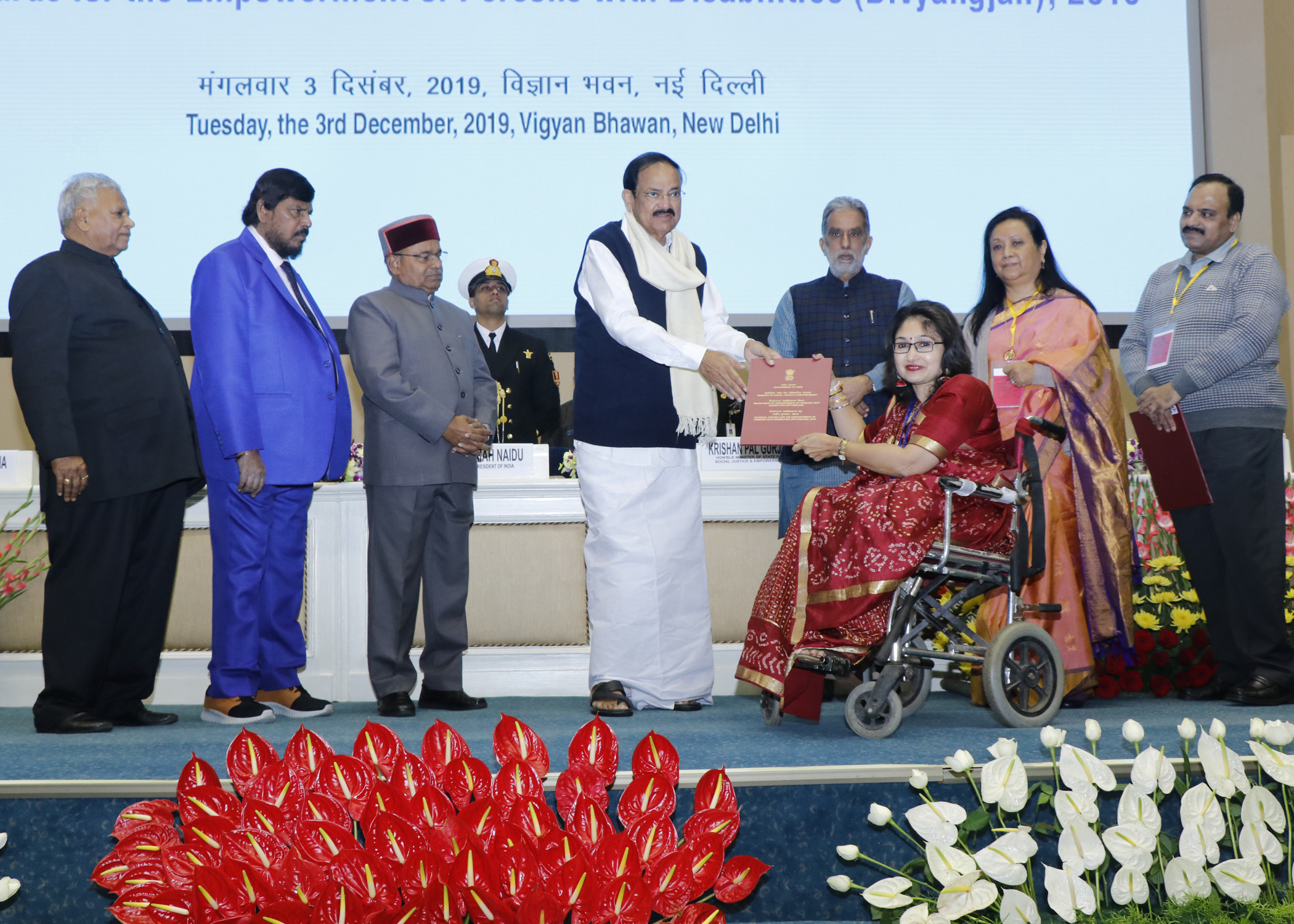 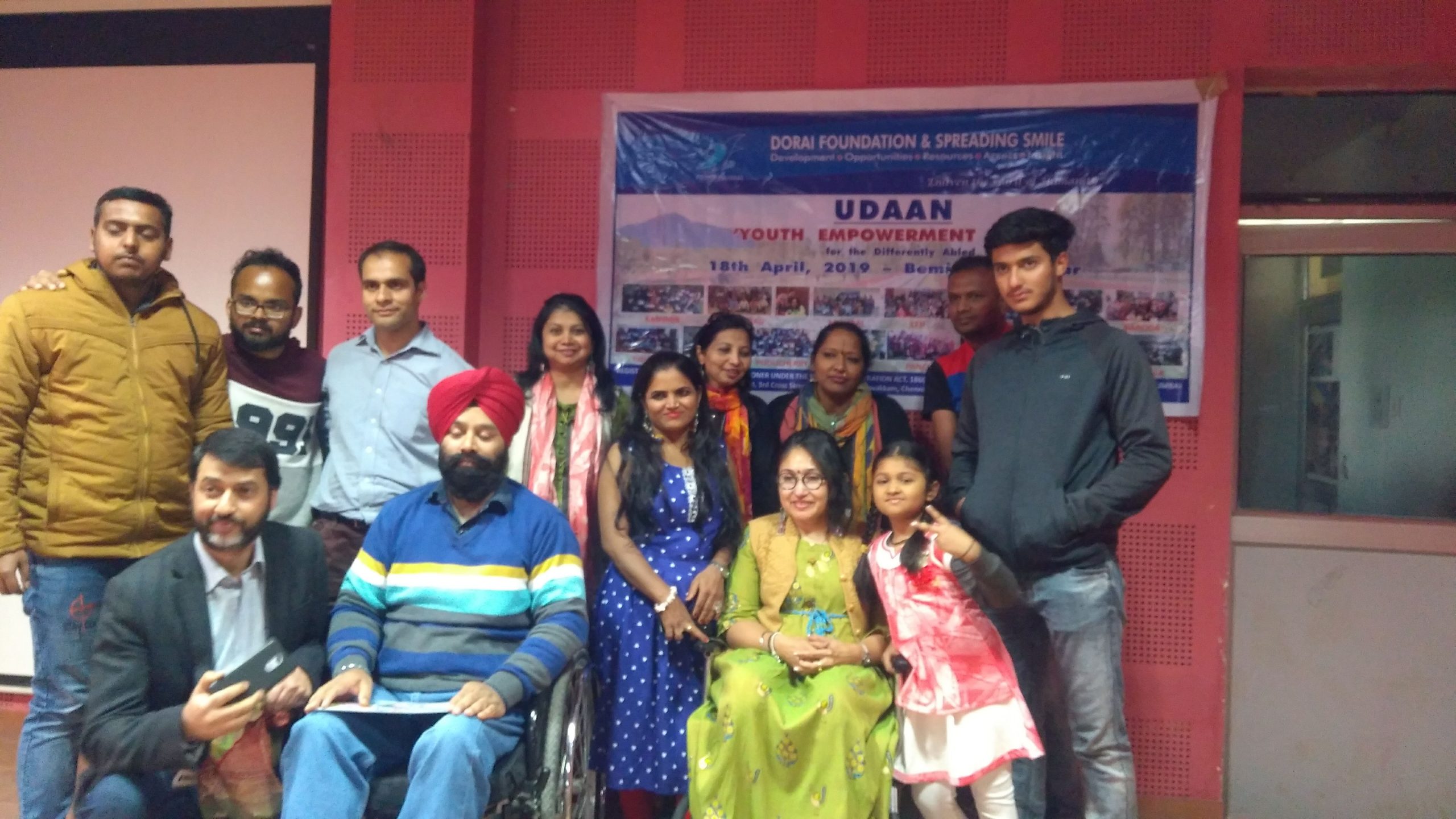 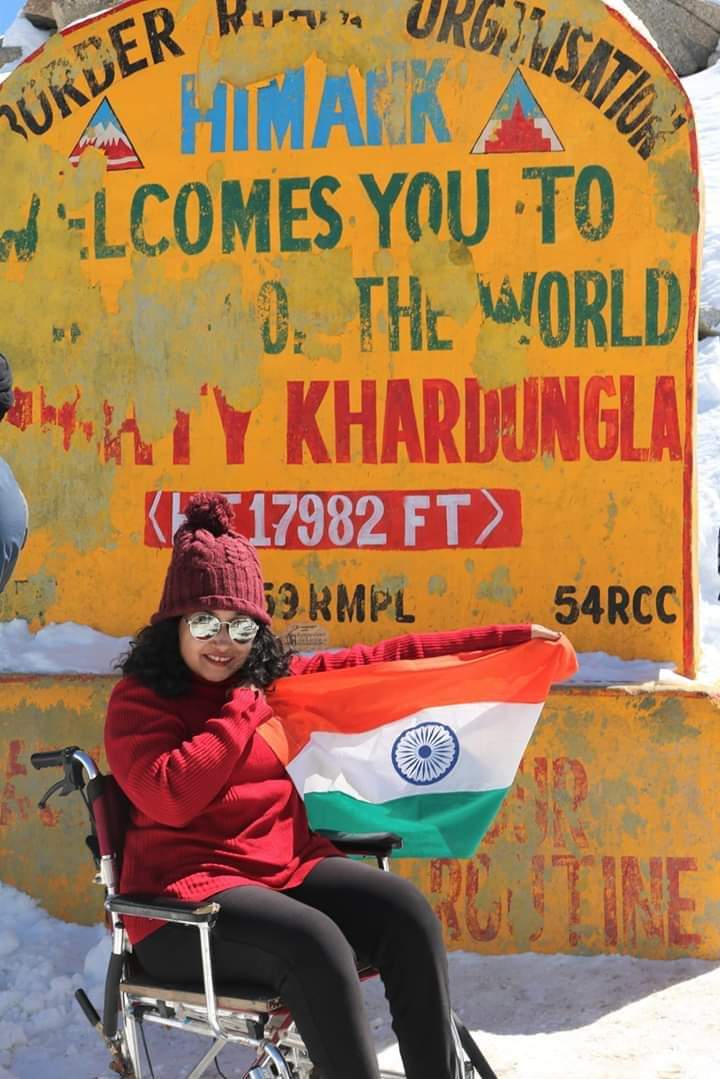 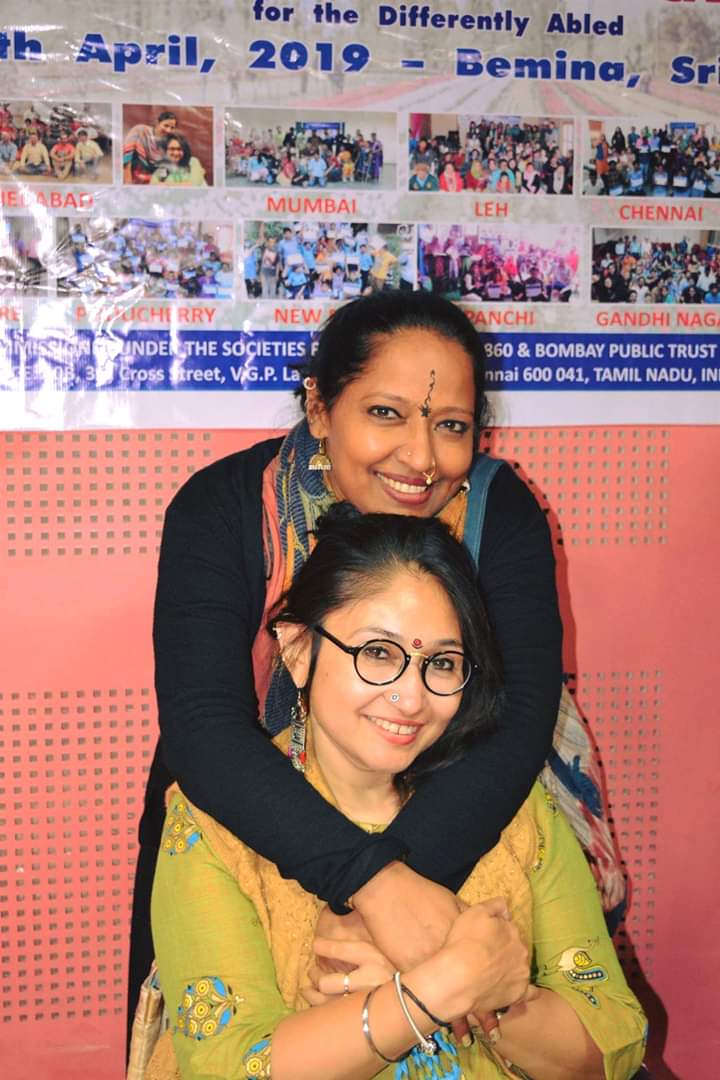